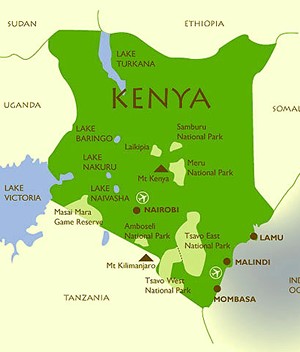 Between 5 and 6 million years ago volcanic eruptions produced these mountain ranges, followed by the sinking of the Rift Valley. Thus the Aberdares, smoothed out by erosion over time, are older than Lake Naivasha and the relatively young Mt Longonot. In 1884 Scottish explorer Joseph Thomson named the mountain range after Lord Aberdare, President of the Royal Geographical Society. In 1906 Captain Ewart Grogan (who famously impressed his future father-in-law by walking from Cape to Cairo to demonstrate his love for his wife-to-be) imported 30,000 trout ova from Scotland, and stocked the Aberdare Rivers. Thus the non-indigenous Brown and Rainbow trout thrive today in the Aberdare streams!

As well as being a beautiful area to visit, the Aberdares are also vitally important. Their streams feed two of Kenya’s major rivers: the Tana – with its Hydro-electric schemes - and Sabaki, as well as being the source of 5 of Kenya’s 7 largest rivers. The forests provide vital water catchment for most of Nairobi’s water supply, as well as that of 7 major towns. Farmers depend on the surrounding area’s rainfall and rich soil for food and cash crops, including pyrethrum, tea and coffee. Overall 1 in 3 Kenyans depend on the rainfall, rivers, forests, and wildlife of the Aberdares for a living!


In the forests animal species include the Red Duiker, Suni, Bushbuck, Colobus and Sykes Monkeys, Elephant, Buffalo, Rhino and leopard – the occasional black leopard has even been recorded. The shy and elusive, highly rare Bongo can occasionally be glimpsed, as well as the rare Giant Forest Hog. On the moorlands Mountain Reedbuck, Elephant, Buffalo, Spotted Serval, and the beautiful black Melanistic Serval are not uncommon. Birdlife includes many highland species including Mountain Buzzards, Crowned Eagles, Golden-winged and Tacazee Sunbirds, Chesnut-winged Starlings, the friendly Mountain Chats and Jackson’s and Montane Francolin as well as the endangered Aberdare Cistocola. Over 290 species have been recorded. Butterflies and insect species are equally diverse and interesting, while reptile lovers may enjoy various lizards - or an occasional (poisonous) Montane Viper warming itself in the morning sun.