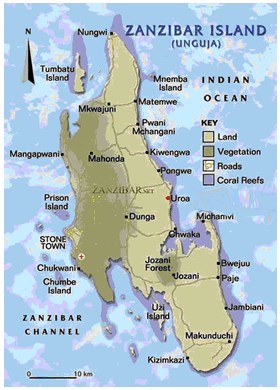 Zanzibar's capital and largest town is Stone Town, located in the middle of the west coast of Unguja. The town was named for the coral stone buildings that were build there largely during the 19th century. Modern-day Stone Town is home to 1,700 buildings and over 16,000 people.

Stone Town is known for its narrow alleyways, large carved doors and covered balconies. The doors, large wooden carved affairs with or without brass studs, are a part of the Swahili culture that were influenced by Arab and especially Indian motifs. The large brass studs became decoration after first having served as spike covers; the spikes having been protection from elephant raids during wars in India. Doors with rounded tops, or lintels, reflect Indian influence while doors with flat lintels demonstrate a version popular with Omanis in Zanzibar. Many doors have Koranic inscriptions and some of the older doors found in town are much less ornate than the later ones. Different carvings to look for are chains around the edge meant to bring security, Lotus and rosettes in the center meant to represent prosperity, and fish at the bottom representing fertility.


Beit-Al-Ajaib (House of Wonders): Admired for its high ceilings and towering pillars, this used to be the Sultans Palace until 1911.

National museum: Here can be found a collection of portraits of past Sultans and their documents, and relics of early explorers - including Dr. Livingstone's medicine chest and local arts and crafts.

Livingstone house: This house was once placed by the Sultan Seyyid Majid for use by the European explorer David Livingstone, while in preparation for his expedition to the mainland in 1866.

Slave market: Zanzibar was the hub of the slave trade in East Africa, until 1873 when it was abolished. On this site now stands a church.

Changu island: This small island used to be known as prison island, where slaves used to be kept pending transportation to other markets. Remains of underground slave chambers can still be seen. One of the main attractions today are the giant tortoise.

Marhubi ruins: This palace was built by Sultan Sayyid Bargash for his harem in the 1880's. It was however accidentally burnt down in 1899 and now stands as ruins.