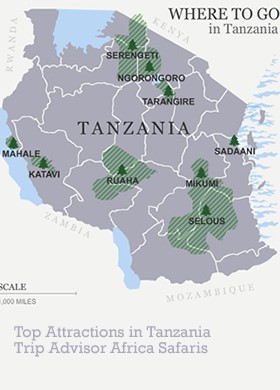 “It is impossible to give a fair description of the size and beauty of the Crater, for there is nothing with which one can compare it. It is one of the wonders of the world.” Professor Bernhard Grzimek: ‘The Serengeti Shall Not Die’ The Ngorongoro Crater has steep wall and even though it may be cold and foggy on the rim it is usually warm and sunny in its floor that is 2,000 feet below. During the descent we experience dramatic changes in scenery and temperature. Dark green candelabra trees give way to African plains flora about half way down. During the dry season the pastures look scorched and barren, but when the rains begin they turn into emerald meadows dotted with small white, blue, yellow, red, and pink flowers. At the center of the crater is a soda lake formed by volcanic ash and rain. During the dry season a white desert forms around the shores of the shallow lake. On the southern side of the crater the crystal clear Koitokitok Springs flow into Lake Makat at a rate of more than one million gallons a day.


The vast Ngorongoro Highlands rear more than 3,000 feet out of the surrounding plains 180km to the north west of Arusha in the north of Tanzania. At the centre of this vast elevated highland is Ngorongoro Crater, the world’s largest unbroken ancient caldera, and surely the most dramatic section of the famous East African Great Rift Valley. A World Heritage Site and dubbed the Eighth Wonder of the World, scientists estimate from the impossible size of the crater, that before Ngorongoro erupted 2 million years ago, it’s summit sat eye to eye with Kilimanjaro’s. The caldera excavated from the explosion is so huge that often you can watch little isolated weather systems skidding across it. To reach Ngorongoro Crater from Arusha, a road winds itself through thick lichen-bearded forests up the long and steep escarpment that forms the Crater’s outside walls to a final altitude of 7,000 feet.

Access from the north is through the Serengeti plains, past Olduvai Gorge, and up a more grassy gentler slope where groups of cattle and goats are tended by their Maasai herders. At the top, from whichever direction, where the road flattens onto the crater rim, the drama unfolds. In front of you, cliffs drop vertically 2,000 feet into the crater floor, a tapestry of pale open grasslands, forests, swamps, fresh springs and soda lakes that spread 20 kilometres to the Crater’s far side. Local Maasai pastoralists have retained grazing rights throughout the Conservation area, and in the Crater itself. This brings with it a sense of ridiculous incongruity combined with the humbling reality that man and wild beast have shared these lands for millennia; you may be studying a cheetah stalking an impala from the compulsory safety of your vehicle, and pick up through your binoculars the ubiquitous red billowing blanket wrapped around a Maasai, on foot and leading his herd to water on the Crater floor, just a hundred yards away!


This is a garden of Eden, packed with some 30,000 animals. The largest herds of animals we see today are wildebeest as they mingle with zebra and Thompson’s and Grant’s gazelle. Unlike their counterparts in the nearby Serengeti, the wildebeest and zebra living in the Ngorongoro do not migrate because water in the crater is plentiful year-round. We’re likely to see large herds of buffalo and sizeable numbers of eland, hartebeest, and waterbuck. Elephants most often browse near the Lerai forest and hippos grunt and snort as they sit out the heat of the day in the lakes. Ngorongoro is one of the few places in Africa where black rhinos can still be seen. Among the predators, there are five prides of black-maned lions with as many as 18 members in each pride. Cheetahs are often seen alone or in pairs. Hyenas and jackals abound. In the forest, at the crater’s rim, we may catch sight of an elusive leopard. Bird life around the crater is also prolific. More than a hundred species are found here that aren’t seen in the Serengeti. Ostriches, Kori bustards, and secretary birds stalk the grasslands. Pure-white egrets and red-billed ox-peckers scurry along the backs of buffalo. Crested cranes honk furiously as they launch into flight. Along the shores of Lake Magadi lesser flamingoes feed in the algae-rich waters.


The Ngorongoro Conservation Area’s climate is influenced by the time of year. There are two distinct seasons: wet and dry. Virtually all rain falls between the months of November to May, making this a fantastic time for bird watching. In the drier months, animals are more concentrated around water areas. The wettest areas are in the east and south parts of the Highlands, facing the prevailing and moisture-laden winds coming from the Indian Ocean. The driest parts are on the plains below and to the north of the Crater, which lie in the mountain’s rain shadow. The Crater rim itself is often shrouded in mists but the floor is usually dry and sunny. Bearing in mind the altitude, the temperature can plummet to freezing at nights particularly between June and November and inevitably it takes the sun a few hours to warm everything up in the mornings.